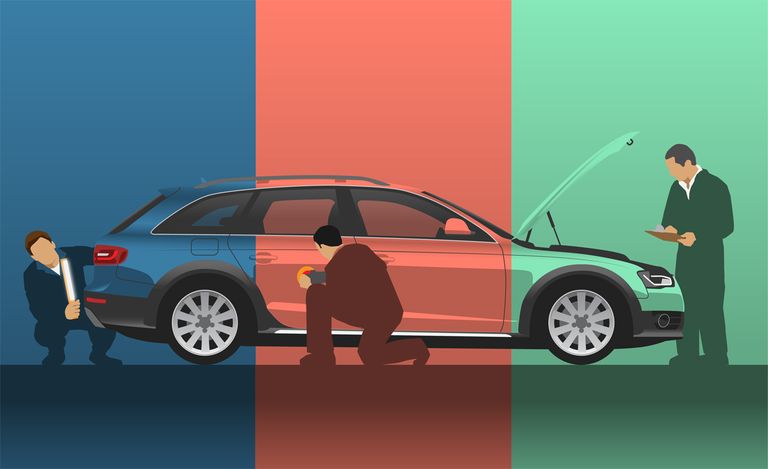 Inspection comprises many points (100 up to 300). For some of them, using certisio will be a great advantage such as :

A key benefit to every manufacturer-backed Certified Pre-Owned vehicle is that the vehicles have been thoroughly examined, and any issues addressed, as part of a multipoint inspection. It’s a constant for CPO cars and trucks sold by franchised dealers in the United States. The purpose of these extensive inspections—the checklists range in length from 100-plus items to Audi’s more than 300—is to underscore that, although the vehicle is no longer new, it is still in excellent working order and thus can justify its pricing premium over similar non-CPO vehicles.

But what is actually inspected? Before the process even gets underway, there’s a basic identification process that ensures the vehicle identification number (VIN) matches and that the title is clean. Most automakers require a Carfax, AutoCheck, or other vehicle history report be consulted and included for the buyer.

To qualify for a CPO program, vehicles must meet maximum mileage and age thresholds, which vary by automaker, so the cars and trucks that come in for CPO inspection are relatively new to begin with. For example:

These thresholds ensure more uniformity among the CPO vehicles on offer and also reassure the buyer that much useful life remains.

These age and mileage limits are among the first things a mechanic will verify when performing a CPO inspection. Some automakers address the presence of aftermarket add-ons: Audi specifies that the vehicle must be “free from current or evidence of past aftermarket modifications,” although dealer-installed OEM mods are generally acceptable. Fiat Chrysler has a line item that simply asks that aftermarket accessories “do not compromise safety, emissions, or operation of vehicle.”

Safety, emissions, and operation are all delved into deeply in every automaker’s CPO inspection. Major areas that get a close look are the braking system, transmission components and operation, and most everything inside the engine compartment. Fluid levels are checked. Individual components are inspected. Hyundai looks for “evidence of sludge” when it’s reviewing items such as engine belts, hoses, seals, gaskets, and valve covers.

All CPO inspections include cosmetic checks, too. For example, on Chevrolet, Buick, and GMC vehicles, the inspection includes (but is not limited to) front and rear bumpers and fascias, the emblems and nameplates, the moldings and appliqué, door handles, and the running boards and side steps. Nissan includes a check for mismatched paint and correct body-panel alignment. This is in addition to checking for any dents, dings, and scratches.

Inside, automakers across the board check safety equipment such as seatbelts and airbags as well as basic functions on the dash such as the stereo and heating, ventilation, and air-conditioning systems. There’s also some fairly extensive cleaning that typically takes place, such as Toyota’s line item stating that the CPO isn’t ready to sell until “all crevices are clean.” Several automakers include cleaning the ashtray and cigarette lighters on their checklists. Toyota, like most automakers, is concerned with smell and makes sure that vehicles are “free of odor, including heavy fragrance.” Also on Toyota’s cleaning list is something more rare: the underhood insulator pad. Mercedes-Benz notes that it verifies operation of features such as its neck-heating Airscarf and its auto-dimming rearview mirror.

Hybrids typically have additional checkpoints such as the condition of the battery and a check of more specialized parts such as electric motors and the anti-theft vehicle-immobilizer system.

For the CPO shopper, maybe the elephant in the showroom at this point is: How do you know that the vehicle was actually put through this multipoint scrutiny the carmakers are promising? CPO inspection checklists end with a series of signatures of those responsible for the inspection process, as well as that of the customer buying the car. So, if you are ready to purchase a CPO car or truck and you aren’t offered an inspection checklist to sign, something is amiss.

All told, the CPO vehicles’ inspections are a fairly extensive list of checks that should give consumers additional reassurance that a CPO vehicle is in better working condition than its traditional used brethren. If you think you could be a CPO shopper, check out our list of 10 questions you’ll want answered before making up your mind.